The History of AERL and the MPPT Solar Charge Controller

Australian Energy Research Laboratories (AERL) was founded by Stuart Watkinson (BE Elec. Eng., Grad. M.I.E.A) in 1985, after the development of the “Power Optimizer”, a revolutionary solution to a complex problem.

Unlike many inventors, Stuart possessed not only a great idea, but also the entrepreneurial skill to turn it in to a commercially viable product.  The “Power Optimizer” would eventually come to be known as the AERL MAXIMIZER™, the world’s first truly Universal Maximum Power Point Tracker (MPPT).

After the completion of his thesis, titled “The Generation of Electricity from Solar Energy”, Stuart devised an electronic unit that would efficiently extract  the maximum electrical power from a small photo-voltaic array, and deliver it to a DC electric motor to assist in propelling a 4-rider solar tandem pushbike.

The pushbike, “Solar Tandem”, was a unique vehicle designed to combine human effort – in the form of pedal power – with electrical energy from solar cells to create an energy-efficient method to transport 4 riders at unusually high speeds.  The experiment intended to prove that a hybrid system of human and photovoltaic [PV] energy can eliminate the need for conventional batteries, while minimizing the size of the PV array required for a given application. 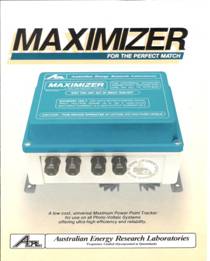 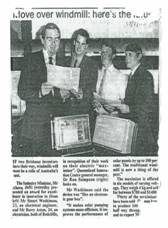 In September of 1984, the “Solar Tandem” was entered in the Courier Mail’s “Great Paper Chase” from Cairns to Brisbane – a special 1000km “Mall to Mall” race held annually in Queensland, Australia.  The “Solar Tandem” took Equal First Prize for “Engineering and Innovation” and shortly after, Stuart filed the provisional patent for his invention which he named the “Power Optimizer”.

The fledgling “Power Optimizer” device, produced in a small home laboratory during a two-week vacation from University, was unique.  It leveraged a remarkable and little known electrical relationship that exists between solar photovoltaic cells and provided a comparatively simple, innovative solution to an otherwise very complex problem.

After graduating from University with a Bachelor of Science in Electrical Engineering, Stuart joined the South East Queensland Electricity Board in February 1985, working in the field of power system engineering and power electronic design.  While taking unpaid leave in June of 1985, Stuart explored the Canadian, North American and Japanese markets with an early prototype of his “Power Optimizer” device, presenting it at the biennial Solar World Conference in Montreal, Canada, where he received encouraging approval from delegates.

Upon returning to Australia, Stuart’s spare time was dedicated to his design efforts where he enthusiastically concentrated on tailoring a commercial product to meet the diverse requirements of overseas markets.  By September 1985, Stuart’s development efforts had resulted in an important breakthrough; overcoming the limitations of the original “Power Optimizer” design.  This new version combined some of the features of his original design with the more recent innovation to become what would be known as the world’s first MPPT Solar Charge Controller.

The US Department of Energy’s Solar Energy Research Centre in Colorado, along with Florida State University’s Solar Research Centre at Cape Canaveral were involved in early trials of the product.

General Fertilizers Pty Ltd (a division of ICI Chemicals) conducted several field trials using the MAXIMIZER™ on Remote Area PV Solar Water Pumping Systems resulting in an 100% increase in the volume of water pumped. These trials demonstrated the enormous benefit this innovative, first-of-its-kind device could have on the farming and agricultural industry.

ARCO Solar (wholly owned by the Atlantic-Richfield Oil Company) – the largest manufacturer of Photo-Voltaic Modules in the world at the time – endorsed the MAXIMIZER™ thanks to its revolutionary performance and benefit to the global PV industry.

Pacific Gas and Electric (PG&E) California, the fifth largest power utility and responsible for the largest Photo-Voltaic test program in the world (sponsored by the US Department of Energy). PG&E’s testing had stalled because of the absence of any device that solved the problem of Maximum PV Power Extraction – until the advent of AERL’s MAXIMIZER™.

Stuart’s developmental efforts went from strength to strength, and in 1986, AERL was recognized for its achievements with the “1986 Award for Excellence in Innovation” from the Queensland Innovation Centre.  That same year, AERL also received the Queensland ”Austrade Qantas Export Award for Initiative and Enterprise” from The Australian Trade Commission (Austrade).

Launch into the Cathodic Protection Market 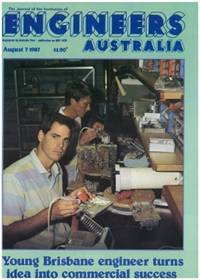 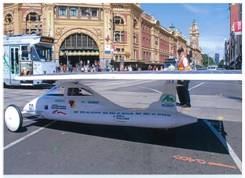 In the late 1980’s, AERL further expanded its footprint in the solar energy market by developing a specialised lightweight version of the MAXIMIZER™ for use in Solar Racing Cars, named the “Race Trim Mini MAXIMIZER™”.  AERL quickly developed a reputation within the International Solar Car “fraternity” for supplying highly efficient, reliable and robust Solar Racing Car MPPT Solar Charge Controllers. By 1990, 8 of the top 10 finishers in the World Solar Challenge, the world’s most prestigious Solar Racing Car event in the world, raced with an AERL MAXIMIZER™ .  AERL itself had an entry in the World Solar Car Challenge that year, winning the Lead-Acid Battery Category and taking 6th place overall in a field of 36 entrants.

Racing Into the ’90s

Thanks to AERL’s success in the 1990 Solar Race Car Challenge, over 75% of the teams competing in the World Solar Challenge and US Solar Car Races held between 1993 and 2007 used the AERL MAXIMIZER™ MPPT Solar Charge Controller.  More than 1000 specialised Solar Race Car MAXIMIZER™ MPPT Solar Charge Controllers have been shipped to more than 200 teams worldwide, including over 60 of the world’s leading universities.

In 1992, AERL moved to new facilities and expanded its operations to meet the exploding demand for its products.  Over the ensuing years, AERL continued to manufacture and distribute its revolutionary products around the world while further improving and developing the range.  In the early 2000’s, AERL continued the expansion of its product range, launching MPPT Solar Charge Controllers suitable for use in both Micro Hydro and Micro Wind Turbine applications.

By 2006, extraordinary developments in component technology made it possible for AERL to develop an extremely compact and lightweight, but most importantly, more efficient, version of the MAXIMIZER™ MPPT Solar Charge Controller.

Trials of the new MAXIMIZER™ achieved even greater operating efficiencies than before (up to 99%), resulting in ultra-low heat generation and the removal of the bulky heatsinks from the product.

This new version of the AERL MAXIMIZER™ was promptly named the COOLMAX™.  By early 2008, AERL was preparing to launch a major marketing campaign to promote it’s new and improved revolutionary products.

Stuart was well respected and widely regarded as a pioneer within the renewable energy industry for his work on the development of Maximum Power Point Tracking. This technology was responsible for drastically improving the commercial viability of photovoltaic energy generation, paving the way for household and commercial solar power as we know it today.

To learn more about Churg-Strauss Syndrome and help in the battle to defeat this deadly disease, please click here.

An advanced form of Stuart’s MPPT technology is still used in AERL Solar Charge Controllers and PV equipment to this day.